Survey finds organic farming has much lower antibiotic use

New data shows that organic livestock farms certified by the Soil Association have much lower antibiotic use [1] than the average levels previously found in national monitoring of all UK livestock farming [2]. Campaigners are calling for organic farming’s high husbandry standards to be recognised as a solution for lowering farm antibiotic use and want to see higher health and welfare standards for all British livestock [3]. 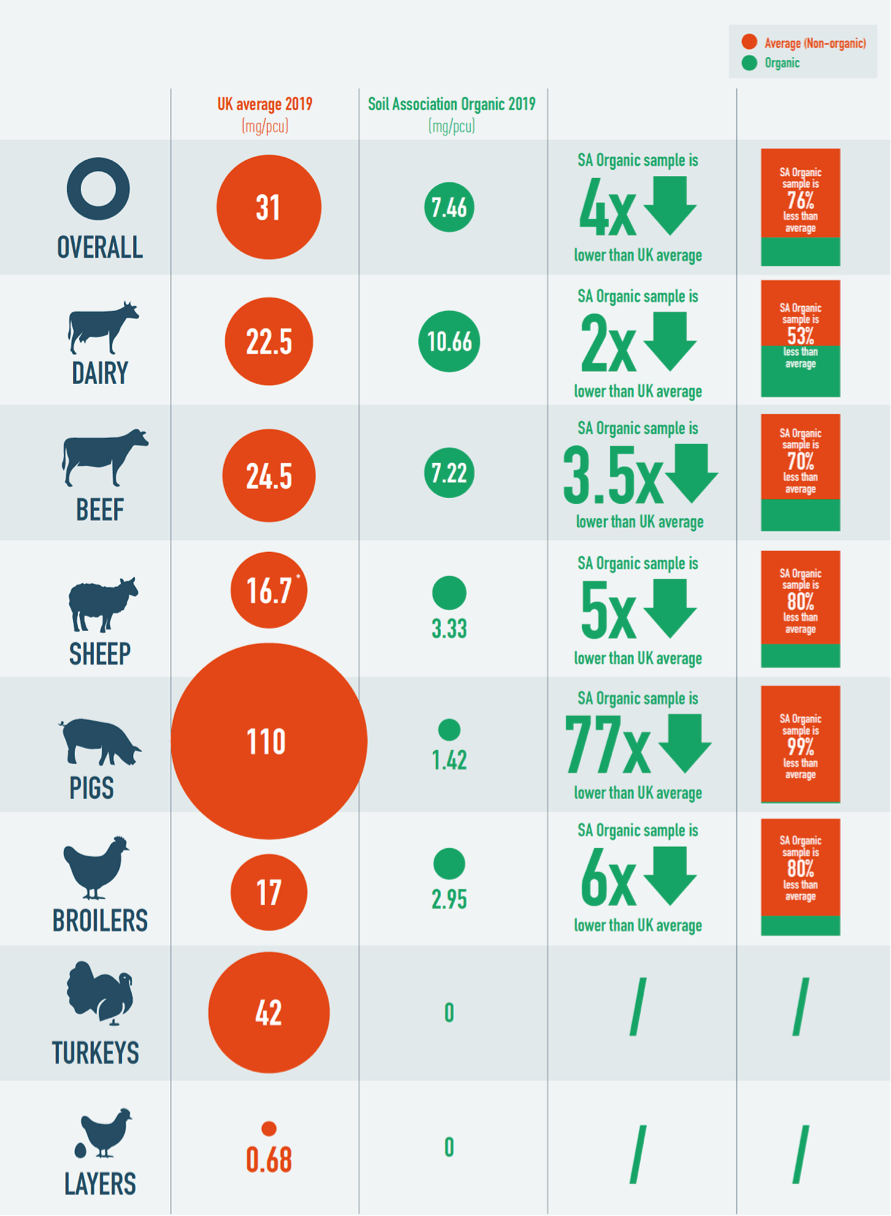 Cóilín Nunan of the Alliance said:

“British farmers have voluntarily cut their antibiotic use by nearly 50% in the last five years, which is very welcome, but these findings show that much lower use could still be achieved [6]. Organic farming has stricter rules on antibiotics which do not permit routine use or preventative mass medication. If the government is serious about tackling the antibiotic-resistance crisis, it should immediately move to end these practices on all British livestock farms.”

Ed Bailey of The George Farm Vets practice, who carried out the survey, said:

“When we asked Soil Association farmers about how they minimised their antibiotic use they told us that husbandry was key. Among a range of factors, frequent responses were that it was important to have good hygiene, to keep animals outdoors as much as possible, to provide a low-stress environment and, in pig farming, to avoid early weaning. Many vets and farmers could learn from those farms with high welfare and low antibiotic use.”

“This study shows that most Soil Association certified farmers already have very low antibiotic use because they are implementing organic principles which aim for high animal health and welfare. Organic farmers are showing what is possible when good husbandry and responsible antibiotic use are combined. As we gather more data in years to come, we hope to drive antibiotic use even lower.”

The survey found some significant differences in antibiotic use in each species, indicating that there is still room for future reductions in use.

The scientists who carried out the study said that it was probable that good health and restrictions on antibiotic use in organic pigs explained the large difference. They said that the later minimum weaning age in organic farming [8], the fact that the piglets were born outdoors and kept in less intensive conditions were all likely to contribute to the lower antibiotic use.

The Alliance to Save our Antibiotics The Alliance to Save Our Antibiotics is an alliance of health, medical, civil society and animal welfare groups campaigning to stop the overuse of antibiotics in animal farming. It was founded by Compassion in World Farming, the Soil Association and Sustain in 2009. Our vision is a world in which human and animal health and well-being are protected by food and farming systems that do not rely on routine antibiotic use.

The Soil Association was founded in 1946 by farmers, scientists, doctors and nutritionists to promote the connection between the health of the soil, food, animals, people and the environment. Today the Soil Association is the UK's leading membership charity campaigning for healthy, humane and sustainable food, farming and land use. Its Chief Executive is Helen Browning, and Chair of Trustees is Martin Nye.