Antibiotics have been used in livestock rearing for more than six decades. In Europe, antibiotics were originally given to animals to boost their growth. Use of antibiotics for growth promotion was banned throughout the EU in 2006, but is still common practice in the US and a number of other countries.

In the UK and across Europe, vast quantities of antibiotics are still used in farming. Farmers may even use antibiotics classed as 'critically important' for humans by the World Health Organisation. What's more, while in human medicine antibiotics are used to cure the sick, in the farming sector these precious resources are often given to groups of healthy animals.

Antibiotics: an insurance-policy for intensive systems

In the EU, farmers may routinely and preventatively dose groups of animals with important antibiotics, even when no disease has been diagnosed in any of the livestock. This is particularly common in the UK pig and poultry industries, where animals are often kept in overcrowded and stressful conditions.

The routine 'mass-medication' of animals enables them to stave off diseases in conditions which are often ‘disease-inducing’.

Routine antibiotic use is enabling the continuation of intensive farming systems, and fueling the antibiotic resistance crisis in people.

Animals do not need routine antibiotics to stay healthy. Organic and higher welfare systems use antibiotics sparingly, and only when animals need it. Livestock should - and can - be kept healthy through good husbandry and welfare, rather than through ‘bought-in’ immunity.

Overwhelming evidence shows that animals are more susceptible to disease when stressed. Stress releases hormones such as cortisol in animals, which can reduce immunity by compromising the immune system. In intensive systems, animals are often bred for maximum yield, rather than for natural disease resistance and robustness.

Where are antibiotics used?

Pigs in intensive, indoor systems can receive antibiotics throughout their lives. Piglets are often given antibiotics preventatively at weaning, which occurs usually at three or four weeks, when pigs will often be mixed and develop post-weaning diarrhoea.

Research shows that early weaned piglets are more likely to suffer from diarrhoea as their ‘intestinal barrier function’ against pathogens is disrupted. Moving to later weaning would reduce the incidence of diarrhoea, which is a major cause of the high levels of antibiotic use in weaners. Organic pig farms wean piglets later, and use much lower levels of antibiotics.

Antibiotics are commonly used in the poultry industry for the treatment and prevention of respiratory diseases and other bacterial infections.

There have been recent reductions by the UK poultry industry to overall use of antibiotics; but poultry farmers continue to use the fluoroquinolones - a class of antibiotics important for treating serious human Campylobacter infections. These may be added to the drinking water of a flock, even when no disease is present in most birds.

Countries including the US, Australia, Denmark and Sweden do not use fluoroquinolones in poultry due to fears around human resistance. The Alliance is calling for a ban to use of these drugs in poultry in the UK. 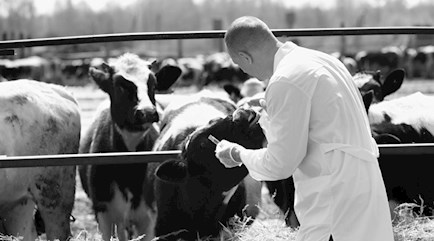 Antibiotics are commonly used in the dairy sector for ‘dry cow therapy’. This involves infusing antibiotics into the udder to prevent the occurrence of mastitis during the ‘dry’ period. Dry cow therapy is often used across all cows as a purely preventative measure – even when there are no signs of disease present.

Research has shown that 85% of non-organic farms used routine, non-selective dry cow therapy in all their cows.

The contribution of farm antibiotic use to human resistance is widely recognised, including by the World Health Organisation and the European Food Safety Authority.

Why the use of fluoroquinolones in poultry should be banned 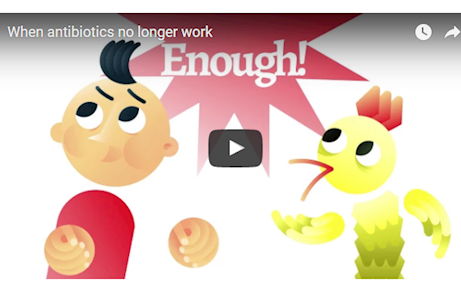 NEW animation - tell the government to act on farm antibiotics

Farm antibiotic misuse is putting our health at risk: watch the animation from Compassion in World Farming and join the call for change!